Today’s word is Chagrin … oh, and I’m talking about hamsters

Okay, whatever. Milo would probably be positively giddy about this delicious new member of the family, even though I don’t think his fat ass is cat enough to catch a cold … or a drift … or innuendo. (Fine, I’ll stop.) 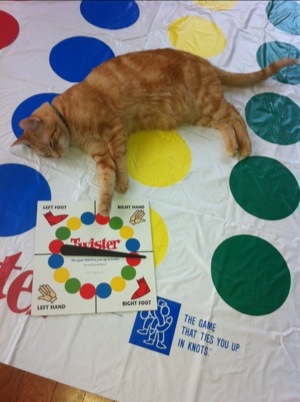 Either he’s drunk or I rest my case

Anyway … my girl’s been bellyaching about adding a rodent to the mix for years. We (meaning she) have entertained the idea of ferrets, guinea pigs, gerbils, field mice (also known as Snake Chow) and now, finally, dwarf hamsters. And, after pussyfooting around with starter pets like goldfish, tadpoles and hermit crabs, I purposefully jumped ahead to cat, hoping to skip the intermediate vermin level.

Her birthday just passed which, I’m ashamed to admit, we haven’t really celebrated yet. I mean, we did have cake and a few small gifts but her party (likely of the roller skating variety) won’t happen until later this summer. At that time, she is planning to ask if she can “hamsterize” her room. (Feel free to use that verb liberally. It’s mine. Let’s see how long it takes ‘til we get it in the dictionary … or at least on Modern Family.)

She keeps reminding me that the hamster is “only $10.”

Aww, that’s not how the world works, sweetheart. You can’t make that last promise. And, frankly, neither can Milo. Trust me. He’s got plans. BIG plans, my dear. 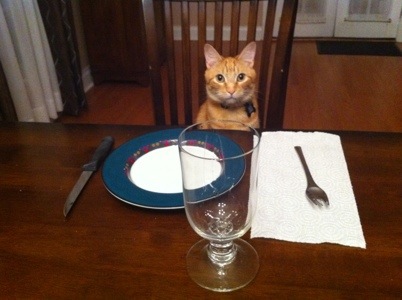 But we promised we would consider it.

So, we’ve both been Googling rodents (relax, it’s more humane than it sounds) to determine things like (1) which ones suck the least as pets? (2) which are least likely to bite off your fingertips? and (3) which are the best escape artists and, subsequently, the best wall and wire chewers? Thus far, Dave has found some truly useful and interesting information. He’s actually helping my child and family with this decision.

I, on the other hand, have proven to be completely useless. Here’s where I wound up by mistake last night: 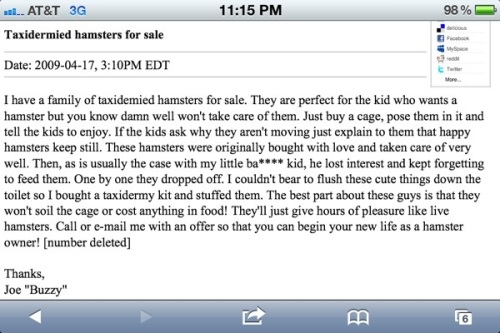 It’s from Craig’s List and it’s 100% real, but the phone number was deleted for the sake of the writer. After reading it … during my girl’s play rehearsal in a CHURCH, mind you … I fell over laughing and completely lost my train of thought for “real” hamster research.

Will we or won’t we?

Only time …and my love for cedar shavings …will tell.