It’s been a crazy week. As in crazy, out-of-the-ordinary stuff keeps happening. I’m not a superstitious person … to a fault my friend, Carrie, might say when I taunted the plane we took to Las Vegas. I’m not an astrological person … to the extent that my only real knowledge of astrology comes from the musical theater production of Hair. All I know is that there’s some weird ju-ju going on in ODNT-ville these days as a lot of truly weird stuff has crossed my path. I culled it down to eleven examples. (Yes, eleven. An homage to my Spinal Tap-loving friends.) And remember, by reading this post, you’re very likely going to catch my weirdness aura … so reader beware!

(1) Vanessa and I awakened a sleeping motorist.

We spotted him driving (I mean, snoozing) through a residential neighborhood as his car slowly started to drift into our lane. As we approached the four-way stop directly adjacent to our children’s school, Vanessa laid on the horn and the two of started screamed out the window until Rip Van Winkle opened his eyes and took control of his old Buick Regal. Yes, he was elderly. Yes, he was wearing an old man bucket hat. And yes, his hands were higher on the steering wheel than his head. Would someone please take his license away?

(2) I attended Hispanic Appreciation Day at my local bank.

No, I am not in the least bit Hispanic. And yet I still found this display of cliché Mexicana offensive. Or at least borderline offensive. Oh, yeah … and damned funny. I felt like I was on an envelope-pushing episode of 30 Rock. Although I guess I should be saying Chico & the Man. Or Dora! I can’t wait for next year. I’m so wearing a pancho. 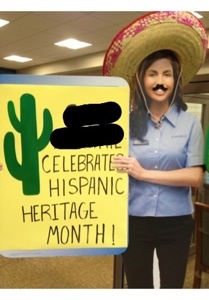 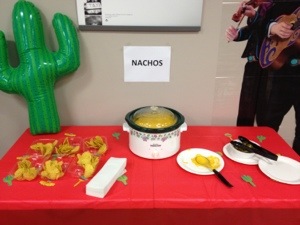 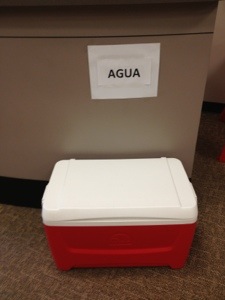 (3) I saw a grown man running through the grocery story with no shoes on, yelling at his “mama.”

She stayed back in line to pay after he fled the store with her keys, laughing and screaming. (I should probably be saying hollerin’.) Then, as she was leaving the store, she carried on a full, heated conversation with him, returning all of his back talk. And I’ll remind you that he was already far away, outside in the parking lot. I watched the whole thing with my mouth open. Those Honey Boo Boo people “ain’t got nothing” on these two. (Did I say that right?)

(4) An 18-wheeler jack-knifed into a crumpled mess under the overpass three blocks from my house.

As you can imagine, it was a scary sight to see. Amazingly, I managed to distract my kids from most of it by handing them my phone activated to the SongPop app. I’m not sure I should be proud of that quick thinking or concerned that my kids were so easily distracted from even seeing the mangled Mack truck a mere ten feet outside of the car window.

(5) I exchanged tweets with Christopher Atkins.

Remember the cute naked guy from Blue Lagoon? Well, I wrote a book about him. It’s actually a little flipbook about all my celebrity crushes. Then, I tweeted all of them about it. Or at least the ones who are still alive. And he was the only one who responded. So, he’s my new favorite. I’ll bet he’s so excited about this book! 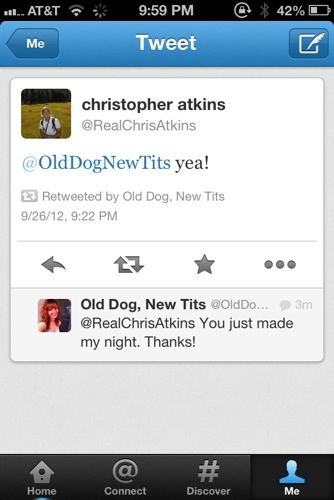 (6) A glass bottle of club soda exploded overnight in my refrigerator.

Yes, I said refrigerator, not freezer. I guess the top shelf of my fridge is set too cold because it somehow managed to freeze up. (Although I don’t see the eggs complaining.) So it exploded into one thousand (okay, fine … one HUNDRED) pieces. And, should you ever find yourself in the same enviable position, remember that glass shards are very easy to confuse with frozen chunks of club soda. Sift with caution!

(7) I called 911 about an abandoned truck in the middle of the interstate during a torrential downpour.

It only had three tires so it was leaning front left. And there was no sign of exploded rubber anywhere. Perhaps it burst into so many pieces that they were invisible to the naked eye. What is WITH me and explosions lately?

(8) I witnessed a pet store trying to pass off a rabbit as a ferret.

I don’t know about you but I’d be pretty upset if I spent $139.99 on this red-eyed leporid (look it up, it means rabbit) thinking I was bringing home a smelly ferret. I’m picturing PETCO employees, Bill & Ted, having the following  conversation. “No way, dude. Just put the little guy in the cage. (To the rabbit) Okay, little dude. Can you tuck your ears down? Excellent! Now, don’t jump.” 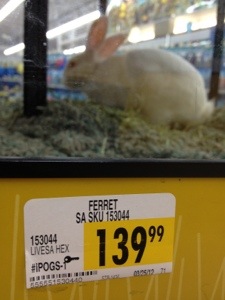 (9) I smacked my skull with great force on the underside of my son’s bunk bed.

For the record, it is an excellent way to wake yourself up in the morning. But the cartoon bluebirds flying around your head are sure to slow you down as you try to pack the kids lunches and drive them to school. Plus, my memory now goes only as far back as age 20. What does ODNT stand for again, you guys?

(10) I shopped in a cute local boutique and left with my new favorite piece of jewelry, for only $13.

My friend was the one doing the shopping. I was surveying the impulse purchases at the register when I saw a box of vintage-looking rings with different birth stones. I fell in love with them immediately so I summoned the salesgirl. “They’re called poison rings,” she said. “Like in Snow White.” Now I ask you, could YOU have passed that up? I am only human, after all. So, I left the store with my beautiful new poison ring.  My girl says I can now compete in the Hunger Games. I don’t know. I have no intention of using it to kill anyone. But I’ll bet it could hold a drop of sleeping aid or a truth serum.  Ooh, or maybe a laxative.

Yep, Herve’s got a new set of wheels. And, boy, did we have fun watching him use it. (Yes, it was a Saturday night. Jealous?) To quote my parents, he looks like a drunk driver operating this thing. I assume he wasn’t but, of course, I can’t be sure. Here. See for yourself …

Did anybody else have a weird week? What’s the weirdest thing that’s happened to you lately?