Thanks, NFL, for enlightening my son … but I’m taking some of the credit, too.

Did you know that? Well, of course, you did.

Even my kids have noticed the ‘pinking’ of their worlds lately. I like that. I like that they’re so aware as children and don’t giggle at all when discussing something this important. Maybe it’s the fact that we’re all saying ‘breast’ and not ‘boob.’ (Yeah, that would likely send them both over the edge.)

My son and I recently got to spend a little one-on-one time together when he was home sick from school a few days. Strep throat. Poor kid missed playing in his football team’s playoff and championship games, which has got to really bite for him. So, what does a mom do to make it up to her boy? Well, once he was feeling well enough to leave home, we went straight for the fast food (greasy and delicious!) and then to a local sports store where, of course, I bought him a for-no-reason present. Love those kinds of days.

And, while we were in the store, my son couldn’t help but notice all of the pink jerseys, hats, gloves, cups, pens and other merchandise that touted the Breast Cancer Awareness message alongside the name of his favorite football team. (Duh, the New Orleans Saints)

I expected him to think all of the pink stuff in a Saints/Hornets/LSU store was oddly out of place. He always asks a lot of questions and I was ready to do some serious explaining. But instead, he just surprised me and said, “Look at all the pink jerseys. All the NFL teams are wearing them for Breast Cancer Month. And pink pants, gloves, socks, cleats, everything. You ought to put it on your blog, Mom.” And then he suggested that I take a few pictures. 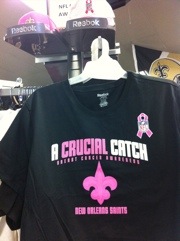 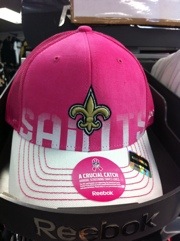 My blog??? My boy’s been paying attention enough to know about Breast Cancer Awareness Month and that his mom is writing a blog?? I just looked at him with my mouth open and decided to do exactly as I was instructed.

I don’t know that I’ve been giving him enough credit. His birthday is Sunday. I think I’ll go buy him an extra present.

4 responses to “Thanks, NFL, for enlightening my son … but I’m taking some of the credit, too.”