The Newest (Non-Breathing) Member of the ODNT Household

I gave blood yesterday. And I brought my kids with me. I like to think that I’m a role model. Sure, I write a blog with a bad word in it, I’ve been known to dye my hair crayola colors and I occasionally serve chocolate for dinner when Dave’s out of town. But I still like to think I that I’m a role model. And I feel it’s important for my kids actually to witness their mother making a small sacrifice to help another.

Except that yesterday we experienced some kind of needle-to-vein malfunction that resulted in me involuntarily bolting upright and crying out in pain while a harried blood center rep ran over and shuffled my frightened, gurney-side children away for cookies and juice. Oops. After a few minutes, I managed to suck it up as they hurried to regroup and draw blood from the other arm. But it was too late. My kids had seen enough. And they both left saying “When I’m a grown-up, I am NEVER going to give blood.”

So I guess we’ll work on charity another day. For now, we’ll nurture creativity. That’s a good one, too. And it’s usually pretty easy to bring forth with my two goofballs. Anyone remember that school fair I wrote about last weekend? Well, I’d be remiss if I didn’t mention what Vivien brought home from all the festivities. I’m guessing she probably spent about $20 to win this valuable 50 cent item. I was cleaning up the house after the fair when I first saw him … in all his hideousness. He was about to hit the Goodwill bag when she screamed his name and begged me to let him stay.

And let me be perfectly clear. The ONLY reason she won this battle was because of the name she’d chosen for him. It literally saved his life and he’s now become a beloved member of the family. 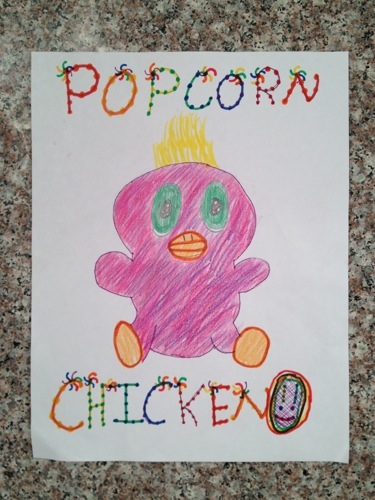 And … apparently … he is running for President of the United States, although he hasn’t specified his party affiliation yet. I’ll let you know just as soon as he establishes his platform.

If these are the new election parameters, number four blows me completely out of the water. Give me cheese … or give me death!

This entry was posted in Uncategorized and tagged blood donation, giving blood, if you're reading these tags please list your favorite cheese in the comments, popcorn chicken, presidential election. Bookmark the permalink.