An Open Letter to Santa-Weary Parents

It’s Christmas 2014 … and I’m facing my first holiday season as a parent with everyone “in the know.” It’s been coming for years. I actually cried in anticipation of it the past two Christmas Eves, appreciating how lucky I was to get just one more each of those years.

Sure, it’s a lot of work. And it can be stressful.  And exhausting. But isn’t it one of those things we live for as parents? Creating the magic and wonder of a well-executed Christmas morning. I absolutely love it. And I was good at it. If I do say so myself.

I became a parent in 1999, when my son Dean was born. We welcomed his sister, Vivien, into the fold in 2002. The first few years were easy. I could literally shop FOR them WITH them. All I had to do was distract them long enough to shove something into the basket or the bottom of the stroller, wink at the cashier to keep our little secret and I was good to go. They believed so deeply that I could even get a little sloppy and no one would ever be the wiser.

Our family dynamic was interrupted a bit in 2005 with Hurricane Katrina. (Yes, I know you’re probably tired of hearing about it. I’m tired of talking about it, too.) My kids were now 6 and 3 1/2, a little older and fully invested in all things Santa. Thanks to the storm, they found themselves with more license for new toys than ever before. We had to work around a few borrowed homes and living situations for a few years but Santa didn’t miss a beat. And my kids were happy.

Once we settled back into a home of our own, we were really able to develop and dive deeply into annual family traditions. I’m pretty proud of some of the things we did as a family … like making a homemade gift for both the mailman and the sanitation department every year or blessing our Christmas tree together after we finished decorating it. I knew that each one of these things was special and would be remembered for years to come and maybe even replicated in my children’s families when they were grown.

Christmas Eve was always the hardest. But it was always my favorite. We knew we had to wait to get to work until the kids were fully asleep. And every year, that hour got a little later. And we were lucky if they waited until 7am to wake us up the next day. That was the rule. “The sun needs to be up before you are on Christmas morning.” Of course, as soon as the first sliver of daylight appeared on the horizon, my kids (who had probably been awake and staring at their ceilings for hours already) would burst into the room to wake two sleepy parents who might have gotten a broken four hours the night before.

I decided a long time ago not to care. If I was tired, I knew the contagious adrenaline would carry me through the day. It always did.

And last year on Christmas morning, I’m really glad I took the time to soak it all in. I had a feeling it would be our last year hosting a “believer.” And, sadly, I was right.

It’s a different kind of Christmas this year. Everyone knows. Fortunately, my daughter is very entertained by the whole “you’ve gotta believe to receive” mantra. So she’s indulging me. “Wonder what Santa’s bringing me, Mom,” she says, with a wink and a hug. No, it’s not the same. It’s the end of an era. But it’s the beginning of another one. It’s a new kind of special.

Why am I taking the time to write all of this down? Because I want to encourage all of my younger, sleepier, more cantankerous counterparts of the world to take note. This year, when it’s after midnight, and you’re wearily nibbling cookies on an already full stomach, making hoof marks with your slippers in the scattered reindeer food outside in the cold, stuffing stockings until you’re afraid the seams will bust and creating a toy display that rivals anything FAO Schwarz has ever seen, think of me. And know that somewhere in the world someone is actually a little jealous of you and all the work you’re doing at that very moment. I urge you to treasure it and imprint it forever in your memory. Take my word for it. It’s something you’ll never want to forget.

A Nostalgic Parent Who Has Reluctantly Crossed to the Other Side

My kids and Santa 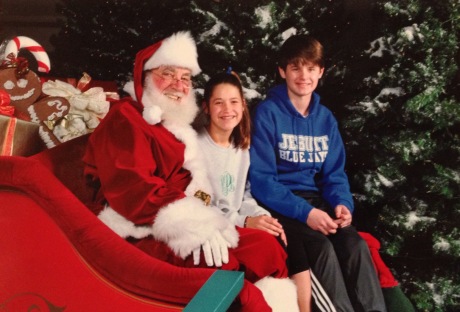 This entry was posted in Uncategorized and tagged first Christmas with no believers in the house. Bookmark the permalink.

16 responses to “An Open Letter to Santa-Weary Parents”