An Open Letter to Arby’s Restaurants 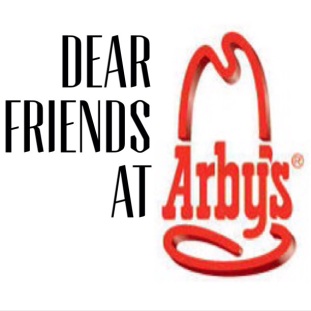 After visiting one of your restaurants recently, I felt compelled … make that obligated to write your company and tell you about my negative experience at store #5274 (located at 3847 Veterans Blvd. in Metairie, Louisiana).

In truth, I have very little experience with your restaurant. Maybe it’s because I’m a mom and I try (notice I said try) to avoid fast food chains for dinner. Or maybe it’s because I’m from New Orleans and sometimes we can be snotty about cuisine and food in general. But, when my daughter (suddenly stricken with a craving for a French dip sandwich) requested that we try Arby’s last weekend, I caved. Because what (honest) person doesn’t like a little fast food splurge from time to time? Plus Arby’s has non-fried sandwich options so I thought it was worth a shot.

When we walked inside the restaurant (on 10/12/14 at 5:56pm), the place was completely empty. One other customer walked in behind us. Because it was peak dinner time, I was surprised to see it so quiet and uninhabited. I honestly thought it was closed until I confirmed that the door was unlocked.

The man at the register was friendly enough and offered to take our orders immediately. After all, he’d probably just been staring at the closed door waiting for someone to cross the threshold for God-knows-how-long. Being unfamiliar with the menu, I needed a minute to decide but made up my mind while my daughter ordered her French dip. I went with the Roast Turkey Ranch & Bacon Sandwich. When I asked about turkey sandwiches, the cashier said it was the most popular one so I went with it. He asked if we wanted meal deals and I said yes. From there, it all went downhill.

Following is a list of the infractions we experienced in chronological order:

1. My Beverage. I ordered a Diet Coke. I specifically said Diet COKE. Arby’s sells only Pepsi products. I guess if I were a regular Arby’s customer I would know that. But I’m not and I didn’t. Which is why I said Diet COKE. And I always appreciate when a restaurant employee takes the initiative to ask “Is Diet Pepsi okay?” Because it gives me a chance to say, “No, thanks. Let’s just make it water.” Your people gave no explanation. I found out on my own at the self-serve soda machine.

2. The Soda Machine. I wasn’t very excited about getting a Diet Pepsi but I’d already paid for it. So I decided to move on and just get the subpar cola. Except that the Diet Pepsi syrup in the machine was empty.  The spigot was running completely clear. I approached the counter again to alert a female employee who turned to mutter something unintelligibly to a co-worker then back to me to reach out her hand, presumably for my cup. I complied silently, blindly accepting the fact that we were going to communicate wordlessly. She took my cup and turned to the counter behind her where there was a half empty two-liter of Diet Pepsi. I would have assumed it belonged to an employee. She then filled my cup halfway with tepid, flat, possibly-someone-elses-personal-beverage Diet Pepsi. I looked at her, confused about what had just transpired and, assuming my expression was because my cup was only half full, she offered “Now you can put ice in it.” I went back to the machine and outstretched my arm so I could fill the remaining half of my cup with ice and avoid Diet Pepsi splashing all over me.

3. The Drink Lids. When I finished filling my likely-privately-owned  Diet Pepsi with ice, I searched for my usual lid and straw combination to finish the job. Needless to say, there were no lids. So I went to the counter a THIRD time to ask for one. “There’s none out there?” she questioned. I fought the urge to be sarcastic and just said “No.” She reached under the counter, grabbed something and came out the employee door into the customer area. Before handing me my lid, she first felt it necessary to confirm that my accusation was true. Then, she walked over and handed me the lid with her bare hand and fingers clutching both sides of it. (Sidebar: Do you know that at Chick-Fil-A, when they refill your beverage  …with Diet Coke, by the way …  they ask you to remove and hold the lid yourself … so as to avoid any germy contamination?) I took the lid and put it on my cup, defeatedly. I figured it was only half full so it was unlikely to touch the contents inside. Contents I didn’t want to drink anyway.

4. The Ketchup Dispenser. As soon as the drink situation was under control, I did my usual fast food meal pre-prep of assembling napkins and ketchup for when the food was ready. And, while there were several large ketchup pumps available, they were … of course … bone dry. Which required a FOURTH trip to the counter to ask for some. Whereupon I was handed a half dozen sticky ketchup packets. I then turned to my daughter to find a table and wait for our order.

5. The Tables. Remember that there were exactly two customers in the restaurant at this time. So only one other table should have been taken. The rest should have been sparkling clean. Do I really need to go on here? Surprise. We passed three tables before finally settling on a fourth that was the least of all evils as I still needed to wipe it down myself before we were seated.

6. The French Dip. Once our order was called and I brought it back to the table, my daughter looked disappointed. “Aww. The sandwich in the picture came with a dip.” Her sandwich was a solo act. I turned around, confirmed her assessment on the picture menu and decided that I was going for it. So I approached the counter a FIFTH time to ask for the dip. The cashier rolled his eyes (I’m hoping at his own negligence), reached around behind himself and grabbed the errant dip from the counter. I said a silent prayer that it was, in fact, my daughter’s dip and not some other employee’s stash like my aforementioned second-hand beverage.

7. The Bacon. The bacon on my sandwich did not taste like bacon. It did not look like bacon. I’m not sure what part of the “pig” it came from, but I highly recommend you procure another bacon provider. I removed it from my sandwich and carried on with my meal, pretending it never happened. For my daughter’s sake.

8. The Fries. They were not even a little hot for the first ten seconds of my meal. I have no idea when they were prepared but I suspect it was sufficiently before we ever decided to enter your restaurant on that fateful day.

9. The Aftermath. My daughter went to bed with what my family lovingly calls “the vomit bucket” that night. Her stomach was churning, cramping and generally just making her miserable. Truth be told, I choked down a handful of Tums to fall asleep that night myself.

Why did I stay for all of that mess …  for one mistake after another … for the comedy of errors that was Arby’s Restaurant that evening? Because my daughter really wanted that stupid sandwich. And, as parents, we do many things we don’t actually want to do for our children. I didn’t complain at the restaurant because I didn’t want to rain all over the mother-daughter outing that she had requested. But I’m complaining now. Because that restaurant is giving your company a bad name. And I really thought you would want to know about it. Please tell me I’m right.

The proof of my infamous visit.