A year ago, I wrote a post about one of the most famous poems ever written. I came across it recently … “and I laughed when I read it, in spite of myself.” Okay, fine. So that’s not exactly how the poem goes. Which is sort of the whole point. It was tough coming up with a second set of jokes for some of these stanzas. But I managed. Or maybe I mangled. Either way, it’s pretty much the same word.

So, with that, I give you ‘Twas the Night Before Christmas – Mystery Science Theater 3000-Style – TAKE TWO! 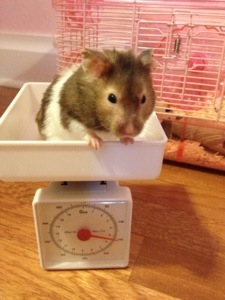 Here’s the proof. And now I have to throw away that food bowl.

And here’s how much he weighs when he’s blurry.

It’s Christmas Eve and what I really want to do is reference you back to my first stab at this parody business entitled ‘Twas a Week Since my Surg’ry” … but that would be lazy, right?  And sooo tacky.  So, I’ll just link you to it and we’ll get to work today on an entirely new version of the famous poem by Clement C. Moore.

My surgery set me back a bit this season, but thanks to my new friend, Honest Mom, for virtually slapping me across the face yesterday … and to Dave for wrapping more gifts in one day than he has so far in his lifetime, I think we’re going to make it.  Now, I just have to wrap his gifts and finish a little easy last minute shopping at the drugstore, conveniently located five minutes away. Well, except that we haven’t prepared a thing for the Christmas Eve dinner we host for my family every year. (Don’t tell them but I’m totally going to get everything from the ready-made section of my local grocery store.)

Anyway, I literally got out of bed to type this morning when these verses started running through my head. Don’t get me wrong.  I love Christmas.  Always have.  But the stress and pressure this year?  Well, it’s killing me. Please allow me to elaborate.

Okay, first of all, gross! My house does not have mice, thanks to Orkin pest control. And, if it did, you can bet my ass would be doing plenty of stirring, to say the least.  And secondly, hello? Even rodent-free, I will be ‘stirring’ until at least midnight to get everything done tonight.

Damn, I wish that I hadn’t upgraded us to those stupid new stockings last year. Those things are huge.  Let’s just say it’s a lot more work for ‘St. Nicholas’ to get the job done.

God, I wish their wants were as simple and inexpensive as ‘sugar plums.’ Not that I have any idea what they are anyway.  And they sound British, so the shipping alone probably negates the savings. I wonder if Amazon even carries them and if they’d qualify for my Prime membership with free shipping. Do I really want something with ‘sugar’ in its name though? Isn’t that why the marketing geniuses at Sugar Smacks changed the name to Honey Smacks years ago? What parent in their right mind would buy something for their child that starts with the word ‘sugar?’

This story is told from the mom’s point of view so I guess that would put Dave in the kerchief.  And, seriously, if he ever tries to go to sleep wearing a kerchief, I will Gilligan-slap him with my cap.  And I will post a picture of him in this kerchief here and all over Facebook so you’ll be the first to know. Oh, and settling ‘our brains for long winter’s nap?’ What are we … bears?

Geez, Santa. Can you and your fleet please keep it down out there so my kids stay ‘nestled?’ I’ve got work to do here.

Great. Thanks a lot, Santa. Now I need to get to Home Depot the day after Christmas to replace my shudders. And, apparently, my sash.   What aisle are the sashes on?

I wonder how many weasels who google ‘breast’ looking for, you know, wind up being directed to ODNT … or this poem. Maybe the famed poet used ‘breast’ as a tag for his poem to get more hits on his website.  Duh. Yes, I know they didn’t have Google back in the 1800s. In the early days, they used stuff like Lycos and WebCrawler.

Whoa, maybe I need to back off the pain meds. This is way worse that swaying fan blades. And, more importantly, where the hell is Rudolph?

OMG, Santa! Will you please keep it down?

Comet? Vixen? Who named these deer anyway?  And, again, where the hell is Rudolph?

Dash away? Wait, you haven’t even come in yet.  Oh, and please get the reindeer off the porch.  Last year, they knocked off a ton of shingles and we spent the week between Christmas and New Year’s fixing the damned roof.

Hurricanes? Uncool, Mr. Moore, uncool.  We, New Orleanians, do not want to be concerned with hurricanes on Christmas Eve.  So, I’m suggesting the following replacement options: ‘As dry leaves put in my daughter’s mud pie’ or maybe ‘As dry leaves cluster across my lawn (sigh).’ Ooh, and one more.  ‘As dry leaves indicate the plant’s gonna die.’ You can have any and all of them.  Consider them my gift.  Just get ‘hurricane’ out of that poem.

Again, with the coursers? What’s with the ten dollar word, Mr. Moore?  You do realize that ‘reindeer’ would’ve worked fine here, too, right?

As Mrs. Claus, I would be so pissed at having to get out ash and soot stains every year.  You know how tired that poor woman probably is by the 26th?  And how do you think the reindeer feel about Santa dressing ‘all in fur?’ That outfit is probably red from years of PETA followers throwing buckets of blood all over the old man.  Santa, ever consider an upgrade? I found this fly red track suit you might be interested in.

Honestly, if someone fell down my chimney in the middle of the night … his appearance (‘peddler’ or otherwise) … would send me running for the panic button on my house alarm’s keypad.

It sounds like you have a terrible case of eczema right now, Santa.  Very common for this time of year.  You really should see a dermatologist about it before it gets any worse.

Seriously, if you don’t take care of that skin problem, that beautiful beard is going to start falling out in clumps.

I know, I know.  How many times can I apologize?  I’m sorry.  It’s just that with the bowl-full-of-jelly-thing and the red face … well, YOU try not to laugh.

I’m not afraid of you, jolly man! … And stop winking at me, creeper.

I get this mental picture in my brain every time I hear this line.

As a child, I always heard “inside of his nose.” Kleenex, Santa?

Sure.  Go ahead, whistle.  My kids have been awake for hours now anyway.

Well, at least they were awake to hear your good tidings.  But were we the last stop in our neighborhood … or was everyone else naughty?  Shouldn’t you be going to other houses tonight?  Also, are you British?  I love the expression ‘Happy Christmas’ and just wrote about it yesterday.  Did you read my ‘Throw your arms around the World’ post?  (That’s ridiculous. Like Santa has time to read ODNT these days.)