Our family just got a little bigger, meaner and more fashionable 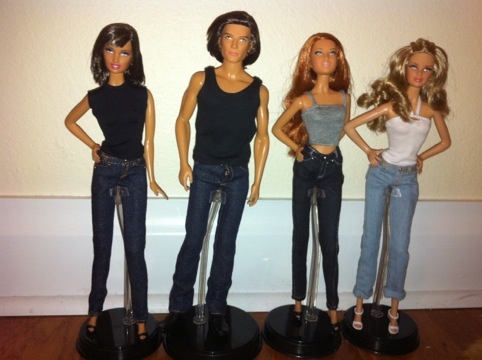 We’ve got Stavros, Pavlina, Bianca and a different blonde Barbie than we met in our original mean girl Barbie post. When we were cruising websites for Christmas gift ideas, my girl took one look at Tiffany, our frizzy-haired friend from the first post, and said, “Uuuuck. No way. She is UUUUG-LY!” So, she chose a different blonde Barbie for her Christmas list. And one who I think looks a lot like a Giselle.

And the first thing I noticed is that Barbie footwear has seen major technological innovation since I was a kid. Back then, we loved the beautiful shoes, every one of them six-inch stilettos, but we knew there’d never be with us for long. They slipped on and off with the ease of a slip-on house shoe. We hated losing them but we accepted that it was just a matter of time ’til one was gone, rendering its mate completely useless. And, after a while, you gave up on shoes altogether and your doll just became a Julia Roberts-esque hippie chic woman who wore everything from cruise wear to evening gowns with no shoes at all.

In 2011, the shoes click on. Did you hear me? They click on. And actually sort of lock in place. I mean, it’s not Fort Knox, but I’d say it could cut the propensity for loss by 50 percent. That’s huge! Huge, I tell you! And, if that’s not enough, this new shoe ‘technology’ is a plus for the cat, too. There’s a greatly reduced chance that any of these pointy little shoes will be navigating themselves through this colon any time soon. And his good news is everyone’s good news.

(Two quick side notes: (A) Only some of the Barbie models have this new shoe-locking technology. Why? How should I know? Nepotism? Blackmail? Or some other inappropriate behavior that I don’t even want to think about between Barbie and her wardrobe designers. AND (B) I wonder if we’ve lost all the male readers at this point.)

Sadly though, my girl didn’t like any of my names for the crew. She said, “Stavros is ridiculous. That’s not even a name.” I tried to explain that he was a Greek exchange student working at the Gap until he made enough money for head shots and a one-way ticket to New York. Because his dream was to come to America and pursue a male modeling career. But she just rolled her eyes and said “No, Mommy.”

I think I love my girl’s new friends as much as she does. She has her names for them. And I have mine. From left to right … my names, then hers.

So, we’ve now cleared off the built-in desk in her room and transformed it into Barbie Central. The dining set she got from my sister-in-law is featured prominently in the middle of the ‘house.’ I cracked up when I took a good look at the assembled box this morning.

“Oh, no. Ken is late!” ??? … Girl, you are a gorgeous woman who nails every profession she tries. Dump his ass, throw something on from your Fashionistas World Tour Collection and go for a spin in your Corvette.

I see hours and hours of Barbie play in my future. I think she even asked her dad to join in the fun tomorrow. That should put an interesting spin on things. Plus, I’m totally going to make him be Stavros. And speak with a Greek accent. My girl wants him to have a French accent. We’ll see …

Oh, and in the style of television programming from my youth, I’ve included a few outtakes of tonight’s Barbie photo session at the end of this post. It was very important to the cat (Milo) to be a part of this activity. It may well be the best part of today’s entry. 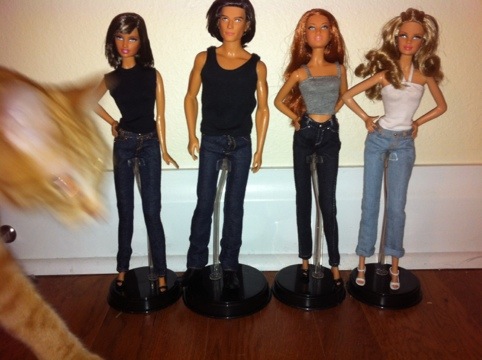 I just saw 50/50.  I don’t think I’ve seen a cancer-meets-youth movie since 1991’s Dying Young (Campbell Scott, Julia Roberts).  This one’s a little different as it’s based largely on truth.  The movie centers on a character named Adam Schwartz who, at age 27, learns he has a rare and serious form of cancer.  Schwartz (not coincidentally) represents the screenplay’s author, Will Reiser.  As is often the case with these films, Reiser even plays a small role in the movie as a character named Greg (who I, unfortunately, have no memory of now that I’m home again and IMDB-ing the movie).

Oh, and don’t worry here.  I will NOT give away the storyline. Uncool.

One of the first things I noticed about the movie was the unconventional motley crew of actors involved in it. (I don’t know. Maybe it’s just me.)

– Joseph Gordon-Levitt (Adam) – I knew I recognized him.  He’s the kid from 3rd Rock from the Sun, all grown up. Nicely acted.  And he bears a striking resemblance to Reiser.

– Seth Rogen (Kyle) – He’s actually playing himself … and not.  He’s a real-life friend of Reiser’s and was his support system throughout the cancer battle.  I guess they figured that ‘Seth Rogen’ as a character would be too distracting so they just made him Adam’s radio work buddy.  Of course, he essentially plays himself anyway … bringing profanity to life in an oddly acceptable, your-grandmother-could-be-in-the-room kind of way.  He really often plays the same character which I don’t always enjoy but I did in this one.  Everyone has a Seth Rogen-type in their lives.  And sometimes we really need him.

– Anna Kendrick (Katherine) – She’s the cute little actress who plays Jessica, Bella’s only non-bloodsucking friend in the Twilight films. If you’re higher brow than me, you’ve likely seen her in Scott Pilgrim vs. the World or Up in the Air.

– Bryce Dallas Howard (Rachael) – Opie’s kid (though I’m really more from the Richie Cunningham generation).  Didn’t I just see her play the same selfish, unlikeable bitch in The Help?  She’s an attractive young woman with amazing eyes, a killer pedigree and some pretty decent acting chops.  Seriously, her agent needs to get on that right away before she’s totally typecast as the contemptible villainess.

– Philip Baker Hall (Alan) – I’m sorry but he’ll always be the surly library cop from Seinfeld to me.  (That show will remain a frame of reference for me for a very long time.)  And I also see that he guest starred in an episode of 3rd Rock from the Sun. Well, now it’s making a little more sense.

The movie definitely held my attention.  Which is why I found myself very pissed off at the Coca-Cola Company and, even more so, at the minimum wage-earning teenager who talked me into a larger Diet Coke than I had any business buying.  Twice … and that was with major restraint … I had to bolt (and I mean literally run the length of the place) to the bathroom and then bug my friend upon returning about what I missed while I was out.  Not a plot from which you want to step away, you know?

There were some pretty funny parts involving pot smoking and manscaping as well as some more sobering ones that I won’t divulge here.   The movie prompted me to think about a few things from other perspectives and, I will confess, that I had a little emotional moment or two as the story unfolded.

And, as always, I ran a little late getting there to meet my friend today.  I had a bit of a crap-lodged-in-eye emergency.  As a result, I skipped the mascara which … as it turns out … was probably a good thing.