Since the success of our last field trip to Kleinpeter Dairy Farms, Virginia and I have been trying to plan a day to hit the road again with our five kids to visit Avery Island, home of the McIlhenny Company and everything Tabasco.  Yesterday was that day. And we certainly had our work cut out for us.

The above trip time doesn’t account for the driving, sideways rain we navigated through yesterday, so the trip took a little longer than expected … plus it included a lunch stop at Subway along the way. (Sidebar: If there’s one piece of advice I can give those traveling between New Orleans and Avery Island, it’s this … SKIP MCDONALD’S! From the lines we saw at three different locations, I can only assume that they’re hiding golden tickets in their fried pies.)

One of the many old, rusty bridges we saw along the way

When we finally paid the $1 toll to cross over to Avery Island (which I believe earns that distinction because it’s surrounded by a sandcastle-depth moat a child made around it), we were quickly hustled in to a tour that was just starting. My kids were excited to be handed their party favors at the front end of the tour.

Our boys immediately dared each other to chug them on camera at the end of the tour. I guess this is a natural precursor to their college days. (Sigh)

Our hostess came in and talked to us a little about the plant, showed us a short movie on the history of the company (interesting until the end when it played more like a commercial for their latest “flavor,” Raspberry Chipotle) and then brought us to an area that overlooked the actual processing line. 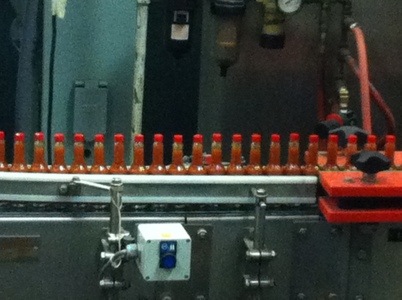 Quick! What TV show does this remind you of? (Hint: Shotz.) 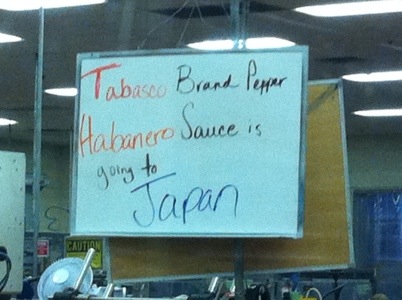 This Avery Island manufacturer, the only Tabasco plant in the world, puts out 700,000 bottles a day to more than 110 countries and their packaging can be found in 22 languages. (ODNT Point of Order – As my kids have reminded me (repeatedly), “It’s SUMMER … and NOT a time to learn, Maaaaaahhhmmm!” Thus, I do not intend to educate … nor do I want to spoil the tour for anyone. This is the most textbook-y sentence you’ll read here today. Promise.) After the traditional tour, we walked over to the tasting bar (conveniently located in the gift shop). Check out all the stuff they were sampling there.

Plus eight more sauces there … and mustards … and jellies …. and salsas … and pickles … and chili … and on and on. I mean, really. What CAN’T you mix with Tabasco?!!?

Well, there’s this frozen delicacy for one. In a word … no. But I suppose I’m happy I can say I tried it.

And then there’s this one. The kids instinctively grabbed samples of it to extinguish their tongues. Ironically … it didn’t help a bit.

After our girls finishing banging out Heart and Soul on the in-store piano a few dozen times, Virginia and I spent a grand total of about $70 in their gift shop. The stuff’s not badly priced. We just bought a lot. And we stocked up on (regular, non-Tabasco’d) drinks from their machines to chill out our taste buds then drove over to the Jungle Gardens gift shop (yes, there are two on the property) to find out about the driving tour of the island. It wasn’t raining anymore but we knew things would be a little muddy after the deathly downpour we experienced on the drive over.

Bear in mind, the first part of the tour is completely free … but the Jungle Tour comes with a price tag: $8 for 13 & older, $5 for kids 6-12, and free for under 6.  That adds up pretty quickly with seven people in the car. (Personally, I think it should be a per car price but my last name’s not McIlhenny and I don’t know a thing about hot sauce-makin’ so I don’t get to make these decisions.)

And, for the record, the drive was very pretty. Very Louisiana postcard. Here are few things we saw along the way. 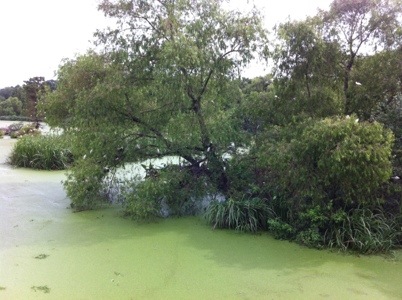 An excellent picture of green swamp muck if I do say so myself.

This green stuff is grass and you can actually stand on it. But I still had my good shoes on at this point so your view is from the car. 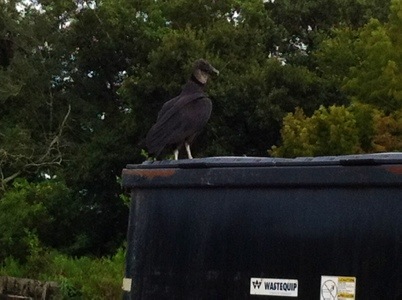 That, boys and girls, is a creepy Louisiana buzzard … in search of rotting meat. Just like in the old Bugs Bunny cartoons.

An alligator swimming in the muck or, as one of the kids called it, lime sherbet punch. 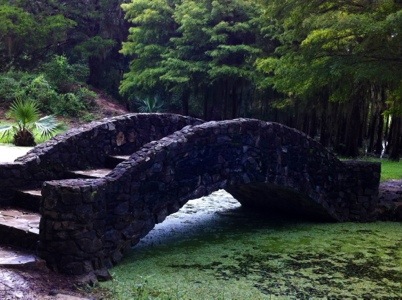 A pretty bridge. I liked it so you’re looking at it.

My best alligator shot of the day.

The same gator shot through Instagram’s 1977 filter. I thought it made him look a little more campy. Like a gator you would’ve seen in a Brady Bunch episode or something.

Thanks, McIlhenny. We had fun at your little compound. Wonder where our moms will make us go next?

P.S. The boys DID chug their Tabasco mini-bottles at the end of the tour and (score!) nobody puked.