Tag Archives: tour of the vineyards

Today, the boy and girls of the ODNT Family Conglomerate decided to divide and conquer the great expanse of California. The boys packed up early and headed out to stay overnight at Yosemite while the girls took on wine country.

(To those of you standing there with your dropped jaw, pick it the hell up. We’ve been over this again and again. Me = Eva Gabor. On some days, maybe even Zsa Zsa. No, that doesn’t mean I’m slapping cops or dripping with diamonds. Nor does it mean I have a Hungarian accent. It just means I’m a city girl who hates getting her hair wet, likes manicured hands and feet and LOVES electricity, largely because of the flat iron upon which I am unapologetically dependent.)

So, we (the girls) took the one mile-ish walk to the pick up point for the tour. And, because we couldn’t get a straight answer as to whether or not food would be available on the tour, we stopped at a little mom-and-pop store along the way to pick some cheese, crackers, grapes, cookies and water and bring it all with us on the motor coach. Our guide was great and quickly fell in love with my girl. I heard her name spoken more than the word ‘wine’ over the PA. He was all “If you look out of your left window, you’ll see one of the original mission bells still hanging in the town square. Vivien, can you see the bell?” AND “I’m getting a little tired. Vivien, do you think you could come up here and take the wheel?” And it certainly kept her attention.

Our tour featured the Sonoma region (not NAPA, which was described as being much “more commercial”). We stopped first at Viansa Winery. It was absolutely beautiful … and here’s the proof.

As soon as we walked into the tasting area, we were welcomed with a taster’s glass of Vino Bianco. The staff there was busy but friendly and willing to answer any number of my (more-often-than-not) goofy questions. After finishing our introductory samples, we each opted for their Vino Classico flight, which allows you to choose four wines to taste for a flat fee. We purposefully selected different wines and shared so we could try eight in all. 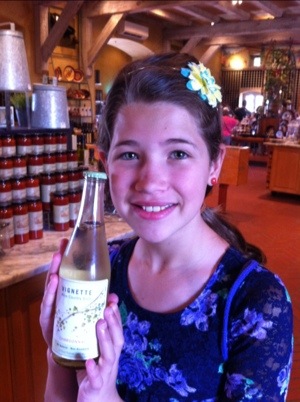 The label says “Vignette, Wine Country Soda, Chardonnay, All Natural, Non-Alcoholic.” I love that they had this stuff for her.

Oh, yeah. And we bought a bottle of wine. (hiccup)

The other vineyard we visited today (this was only a 5 hour tour) was Roche Winery & Vineyards. It’s situated within the little community of Sonoma, California. And the wine flight there was pre-determined.

Here’s what we sampled:

Between the Syrah and the Tamarix, the vineyard hostess took us inside to sample wine straight from the barrel. She used a dropper to extract the wine directly from a small opening in the barrel. And … can I add that she said the small opening is called a bunghole??

Here I am … trying to look all sophisticated … inhaling the aroma and volatizing the wine around in my glass … when the woman has to drop “bunghole.” The good news is that I’m not a laugh out loud kind of person (unless I am really tickled). The bad news is that I can make no such claim about my eyes. And the woman was looking right at me. She laughed and said she hears Beavis & Butthead jokes all the times. Now, because I hated that show as there are times that I really am holier than thou, I assured her that my reaction had nothing to do with those two animated boobs and that the term ‘bunghole’ was around long before they re-popularized it. (I’m quite sure I impressed the crowd with my bunghole knowledge.)

But, you know … I just had to look it up when I came home. Here’s what I found on Wikipedia:

Usage of the term as a slang word for the anus dates back to at least the 16th century, as shown in Gargantua by François Rabelais. “…I say and maintain, that of all torcheculs, arsewisps, bumfodders, tail-napkins, bunghole cleansers, and wipe-breeches, there is none in the world comparable to the neck of a goose…”[3]

In the MTV cartoon series, Beavis and Butt-head created by Mike Judge, the term “bunghole” was popularized as both a personal insult and slang for anus. In hisCornholio persona, Beavis says that he needs “TP (toilet paper) for my bunghole.” The two central characters also use the term when referring to one another.

Truly, it was a proud day to be me.

Anyway, we bought another bottle of wine. And when the wine … and bunghole conversation … was complete, we walked around the little town, wishing we had more time there. We, of course, went straight to The Cheese Factory (NOT to be confused with The Cheesecake Factory) which was a gourmet food store where we bought everything from cheese, strawberries & creme fraiche, gelato, water crackers and fudge. (God, I hope I remembered to pack my stretchy pants.)

Then, we found our way back to the bus and were entertained all the way home by our tour guide’s extensive knowledge of all things San Francisco, Sonoma and wine. Free of charge … I’ll share one of the many things we learned today.

Q. Why are roses often planted alongside the grapes at these vineyards?

A. It’s the same logic as coal miners bringing a canary into the mines. They knew that the very fragile canary would pass out from lack of oxygen far before they would so it gave them fair warning. Roses are extremely susceptible to excessive moisture and thus will wilt long before the grapes so the farmers have time to take the necessary action to save them.

Yes, I know. You’ve all been wondering for years. You are welcome! I’ll bet you don’t this kind of information on David Snape‘s blog. Probably just a coupon for a whitening toothpaste. Wait! I could probably use that after drinking all of that red wine! Damn it, Snape.

When we were almost home, our guide pulled over to a beautiful look out spot right before the Golden Gate Bridge. It was a little tricky to take pictures and keep from blowing off the mountain but we managed.

We got back to the tour drop-off spot right around 6pm. Our plan was to catch a cable car to Chinatown (which is right near our condo) but the wait to get on was 45 minutes. Not today. So, we went on foot, taking a different but still-one-mile walk back to the condo and passing right through’s San Franciso’s Little Italy. Everything looked amazing. But, unfortunately, we weren’t hungry and we were tired, so we kept walking, stopping only once to pick up half a dozen things at the little grocery store. Plus, it gave us a short breather before taking on the steepest incline of our trip home. I guess I thought a gallon of milk in one hand could balance two wine bottles in the other. I guess I thought carrying more on the steep incline would be easier. Maybe I should’ve offered my girl a piggy back ride on the way up as well.

Whatever. I’m here. We made it. We’re exhausted. No one slept much last night so we all are tonight. Until tomorrow, I leave you with a picture of the Golden Gate Bridge as taken from Marin County.