When I began writing tonight, I was immediately reminded of a song. And I was looking for a You Tube clip for the post when I remembered seeing the original performance of this one. It was sung by Renee Zellweger for a movie I “meated” for called My Own Love Song. Nick Nolte was in the scene, too, playing the ‘Nick-Noltiest’ character I’ve ever seen. And … if you look carefully (like super carefully with your finger poised over the pause button and some high-tech enhancement software to illuminate the background) … you just might see me around 2:15 and 3:15. Honestly though, I’d be impressed if anyone actually spotted me as it took even me a few times to find me. Anyway, here’s the clip:

From California, to the New York Island

From the redwood forest, to the gulf stream waters

This land was made for you and me

We rented a car today and drove as a group (battling four sudden cases of car sickness, myself included, thanks to some pretty winding roads) to Muir Woods National Monument to see the famed Redwood Forest. And I’ll be the first to admit that they modeled the Eva Gabor character on Green Acres after me. Even still, these trees are magnificent. Case in point.

The picture gets hazy at the top because the trees are actually scraping against the sun. 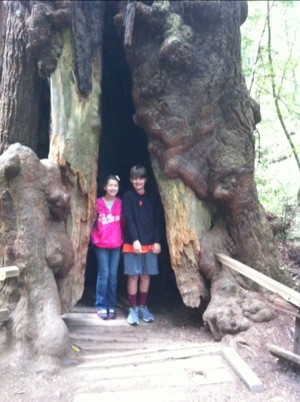 Two kids in a tree. (Great children’s book title. Or maybe the name of a yo-yo trick.)

How cute is this little hiker? #biased #hashtagsoutsideoftwitterarecool

If you are a nature lover (I am insomuch as cows, goats and sheep all live on farms and give me precious cheese), this stop is a must on your trip to San Francisco. It’s an easy walk, there’s a restaurant on site and even a place to purchase necessities like this stuffed chipmunk. We saw scads of them in the forest. 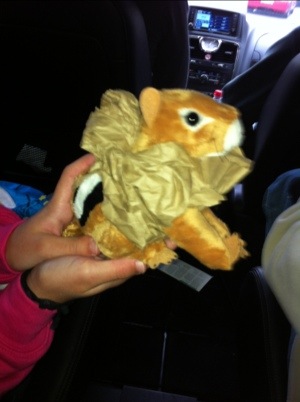 Why is he wearing a paper bag you ask? Apparently, ‘Herve’ is a homeless chipmunk. (My girl‘s been exposed to San Francisco’s large population here. Don’t blame me. I just bought some pretty silver earrings.)

We trekked back to the car and drove from the park to Sausalito for lunch, shopping and general sightseeing. It’s a cute little town. But, honestly, the whole time I was there, I could NOT get this stupid song out of my head. Warning: Do NOT click unless you want to be afflicted with the same problem. I’ll bet Sausalitans (if in fact that’s what they’re called) have been saddled with this unwanted spokesperson for years. Or maybe they just embrace it as with the whole ‘Sweet Home Alabama’ phenomenon.

After stocking up on candy and Dramamine, we drove back across the Golden Gate into San Francisco again. Parking the car was a little challenging on the 45-degree angle street on which we’re staying but we got it done. Everyone was pretty much in for the night but I really wanted to see Chinatown, located only a few blocks from the condo. So, I took the short walk on my own, made a mental note of all foot massage joints for later and snapped a few pictures. 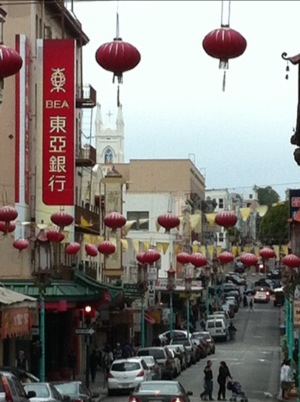 Then, I called my family for their dinner order … springs rolls, fried wonton, crispy chicken, miso soup, etc. That’s when I confirmed the microphone on my iPhone was completely dead. What that means is, when I’m on a phone call, I can listen but I just can’t talk. Can you imagine how frustrating that would be for a verbose person like myself? It’s a good thing I can text with the dexterity of a teenager.

Anyway, if you need me … don’t call. Unless you just want to tell me off and not have to listen to any of “my lip.”  Stupid iPhone. And on vacation, too.

Until tomorrow, here’s a nebulous view of San Francisco taken from the heart of Sausalito.