Rafiki, George and even King Louie have Nothing on these Modern Monkeys

Once upon a time …

there was a little girl named Vivien. And Vivien had a mother who loved her very much. Vivien’s mother wrote a blog called … well, this is a fairy tale so we’ll just call it ODNT. And, on ODNT, Vivien’s mother wrote about all kinds of interesting people doing all kinds of crazy things in all kinds of far away places. But what Vivien liked best about ODNT were the product reviews. Because sometimes, when she was very, very lucky, the product her mother was sent to review was something unmistakably and truly magnificent. Something that she could keep for her very own.

One day, as Vivien was toiling through her daily homework, she heard the doorbell ring. “I’ll get it,” she said running to the door, completely unaware of the surprise that awaited her on the other side. Opening the door, Vivien saw a brown box. It was big enough to fit a basketball inside of it but, when she lifted it, she was shocked to discover it didn’t weigh any more than a loaf of bread. “Mama … Mama!” she called out. “You got another package.” Vivien placed the box on the table by her mother and turned to walk away.

Vivien’s mother smiled knowingly. She knew that Vivien had no idea what was inside. She knew that this time Vivien would be so excited that she might actually want to write the review herself. “Well,” she said to Vivien. “Aren’t you going to open it?”

Vivien’s mouth fell open. “What?” she said. “But YOUR name is on it. What is it, Mama?” Her eyes were simultaneously confused and excited. “Only one way to find out,” answered her mother, who wore a sly grin on her face as she pushed the box toward Vivien.

Vivien tore into the box like a child on Christmas morning. 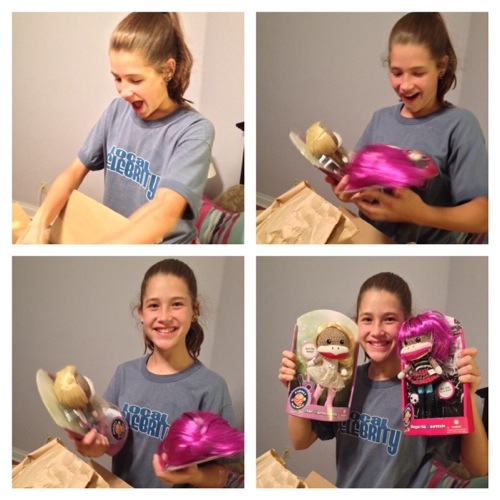 “Oh, my gosh!!! Sock monkeys! They are sooo cute! I love them both soooo much! Thank you, Mama.”

“I’m glad you like them,” said her mother happily. “But they’re not from me.” Vivien looked up, again confused but still ecstatically clinging to her new stunningly stylish simians. “They were sent here from a company called Patch Products. All the way from Planet Sock Monkey.”

Vivien laughed. “Is there really a place called Planet Sock Monkey, Mama?” she asked her mother. “Well, I’m not sure,” teased her mother. “But I’ll bet if there is, your two new friends, Star Harmonkey and Magenta Beetsch, are two of the coolest monkeys there.”

“I don’t know, Mama,” Vivien interrupted … politely, of course. “What do you mean?” asked her mother. “Well,” Vivien explained, “it looks like there are a whole bunch of crazy monkeys living on that planet. Besides mine, I see a pirate … and a zombie … and a rapper … and even a cute, little nerd!”

Mother and daughter laughed in unison.

“So I wonder why they sent us these two monkeys,” said Vivien’s mother. And she began examining the two adorable creatures. “Oh, that’s easy, Mama,” explained Vivien. “Really?” said her mother quizzically, looking up from her meticulous monkey inspection.

“You see,” said Vivien, “Star Harmonkey is a sweet girl who loves to sing and perform for people. And it says she has a sparkling personality.” Vivien’s mother nodded. “And Magenta Beetsch is a kooky girl who loves music and being a little different from everybody else. And she likes to make her hair weird colors.”

“I think I see what you’re getting at, Vivien,” her mother smiled. “They’re US!!” Vivien shouted. “Awesome!” she squealed, grabbing Magenta and turning to her mother. “I’m going to call this one Magommy. Because she reminds me of YOU, Mama.” 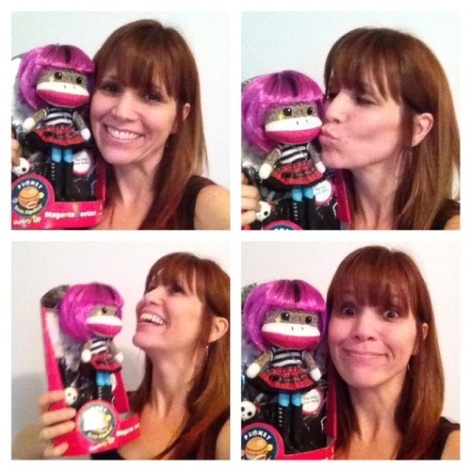 “Wow. So the monkey and I are, like, Bennifer? Okay.” Vivien’s mom, laughed under her breath. “Benni-who???” Vivien asked. “Oh, nothing. It’s a grown-up joke,” her mother answered. And Vivien went back to playing with her tweenage perfection presents.

“Well,” her mother sighed, “I guess I need to start writing these reviews.” And she sat down at her laptop, fingers poised over the keyboard. “Know what, Mama?” Vivien said, hugging her monkeys and looking deeply into their expressive little eyes, “I think you already did!”

Want to win one of these trendsetting little friends for the little monkey in your life? Mel and I are each giving one away right here. Our two lucky winners will get to choose from the six limited edition friends listed above. (More monkeys are coming soon to Planet Sock Monkey.)

Entries will be accepted until the end of Monday, November 11, 2013.

12 responses to “Rafiki, George and even King Louie have Nothing on these Modern Monkeys”