The Downside of Not Being Anonymous at ODNT

Sometimes I regret going public with my blog. There are so many anonymous writers out there. I’m very jealous of these people.

They can just … write. Without judgment or concern of any kind. I think that’s pretty cool. And extremely cathartic.

In MY world, every word and every picture in every post I write is given careful consideration before I hit publish. “Would that description piss her off?,” “Is there any chance I’m going to get that guy fired if I let this go public?” and most of all “Are people going to think I’m nuts if I admit the full truth here?”

Probably. To all of it. So I edit … and I abridge … and I massage … until, in the end, I am still left with the truth, but it’s a polished truth. It’s the one I’m prepared for you to see when you look at me. Think of it as Picture Day at school. The end result really is a picture of your child, but his hair is actually clean. And brushed. And he’s wearing the one shirt that doesn’t have a big stain on the collar. Plus you paid extra for the photographer to airbrush out the scab on his chin.

Well, for starters, it’s what I do best. I figure if I talk long enough, I’m eventually bound to say something brilliant, meaningful or at least that you’re willing to listen to until I pause to take a breath. Secondly, I guess it’s just because I’m a little blue. Because my girl started back to school today. It’s her last first day at the little elementary school we settled into after Hurricane Katrina. My son’s already moved on to a new school. She’ll be starting a new one for 8th grade next year. (Remember, New Orleans high schools are weird.)

And … because I’m me … my mind can’t help but wander to a few years down the road when they’ll both be gone for college. I know, I know. It’s still years away. But wow. I don’t know how anybody does it. Maybe I’ll figure that out in the future. But I doubt it.

Until then, I’m just going to pretend I’m not really thinking about it when we’re talking about something else completely unrelated so you don’t think I’m too crazy, alright? Even though a portion of my consciousness will secretly be consumed with it every day until it happens. Then, when I smile and say, “Pleeeeease. I’m fine. Let’s go grab some lunch,” you just pretend to believe me.

Because since I’m standing in the middle of the room wearing a big, stupid name tag that says “Michele Robert Poche,” that’s about as much as I’m willing to let loose right now. 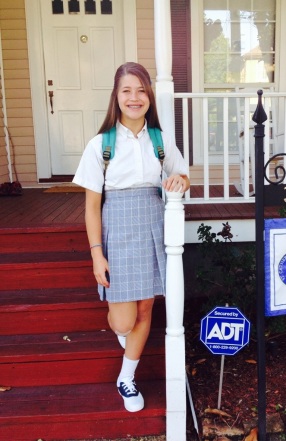 Have a great first day of school, Viv. I’ve enjoyed every single one of them. Now … um … let’s go grab some lunch.

This entry was posted in Uncategorized and tagged anonymous versus public bloggers, first day of school. Bookmark the permalink.

7 responses to “The Downside of Not Being Anonymous at ODNT”