6 Unusual Things That Happened to Me Since My Last Post

1. Eric Lefkofsky at Groupon has ignored me. For now. But, in his defense, it is the busiest season of the year. Perhaps he’s just bogged down in holiday parties and shopping. Or maybe it’s his responsibility to move the elf in his house at night. That’s enough to make anyone crazy. Anyway, I’m sure he’s just trying to figure out what little gift he’s going to send along with his glowing reply. That’s GOT to be it. I am not giving up. Yet.

2. I attempted to rescue a small dog to return it to its family. I failed.

3. I attempted to help an elderly couple whose tire exploded right in front of me on the interstate. I succeeded.

4. My computer crashed. Utterly and completely. The one with ALL my written work, short stories, novel segments, articles, pictures, videos, etc. on it. Was it backed up? The next person who asks me that question loses an ear. Take my advice. Go back up your computers. Right now. 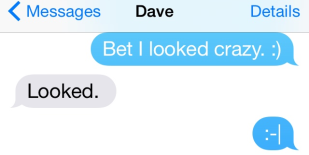 5. I seem to have developed a minor tic in my left eye. Truthfully, it first presented itself earlier this fall. But, it’s been so pronounced lately, my eyelid could effect a category three hurricane. I’m not a therapist but I’m pretty sure it’s directly correlated to #4. (I need another cookie.)

6. I almost won $10,000. I wish I was kidding. 300 tickets were sold. And, one by one, each of those tickets was pulled from a barrel until only one remained. Guess what number I was? (I will pause here to build suspense) Number two. Number TWO! I’M NUMBER TWO! (Yes, I realize the irony of that statement.)

So these were the final four. The two green squares were the last men standing. (Insert expletive here) My sincerest congratulations to the winner.

Because, seriously, who doesn’t need the money? (Sigh)