A few weeks ago, I was having a crappy day and my friend, Vanessa, shared a short video clip with me. I can always count on her to make me laugh with any number of crazy viral videos circling the globe. This one was easily among the best.

If you watch John Oliver, you’ve probably already seen it. It’s called … quite simply … Fuck You, 2016. (PLEASE don’t play it in front of your kids.)

You can’t watch it without laughing. And thinking of your own misfortunes of the past year. She and I have traded the tagline and meme’d a million little things in our lives in the past few weeks. 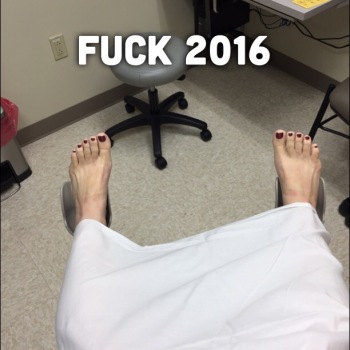 The circus freak sideshow of the election aside, 2016 really was a year for the shit-stained books, wasn’t it? Racially-provoked violence all over the country the likes of which we haven’t seen in decades; the horrific, alligator incident at Disney World (I can still barely speak of it); Harambe, the slain gorilla; one of the deadliest shootings in U.S. history in Orlando; Gatlinburg and the Smoky Mountains going up in flames; the Bastille attack in Nice, France; the catastrophic flooding in my Katrina-adopted hometown of Baton Rouge … the list goes unmercifully on and on.

And, while I certainly can’t compete with the world’s problems, it wasn’t a stellar year for me either. In addition to my car getting nailed (twice) and a few other calamities about which I’m not allowed to write here, I celebrated my birthday last summer by catching my hair on fire. Fuck you, trick candle company.

(Seriously, I want to know.)

Editor’s Note: Before I could hit publish … Debbie Reynolds. Good God, 2o16. Stand the hell down.