The Photographic Proof that I am NOT a Vampire

My writing prompt for today comes to me from MamaKat: “Find a photo of yourself taken 10 years ago and display it on your blog along with a current photo. How have you changed since the day that photo was taken?”

Fortunately, I organize my pictures by year. They’re in chronological order in a box in the original Walgreen’s envelopes. And I made the minimal effort to scrawl the month and year on the outside with a ballpoint pen. (Martha Stewart I am not.) So when I read this prompt, I turned to my box (or rather boxes as there are now six of them) and searched for anything marked 2004.

Truly, I had a helluva time finding any of me. My kids turned 2 and 5 that year. And they were aDORable. So I was usually behind the camera for all of the pictures. But I did manage to find a few old snapshots and (thanks to iPhones and vanity) I have plenty of current pictures. And I decided to arrange the “thens” and the “nows” into two collages. For you.

Because I know how much you like that kind of thing. 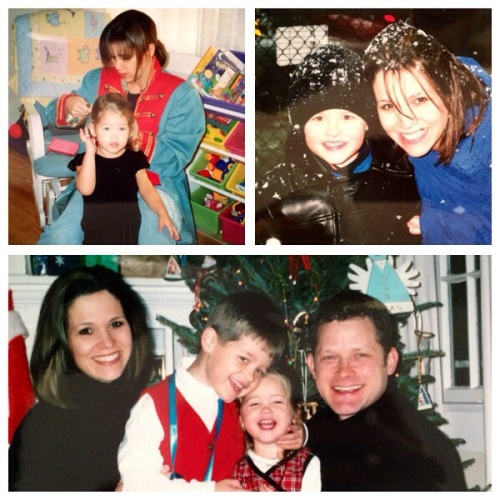 This woman is busy. Her kids are still very young. She doesn’t have time to put on make-up and perfect her hair for pictures. Apparently, she doesn’t even always have time to look at the camera when her picture is being taken. Unless, of course, it’s Christmas Eve. She can make time for that one night of the year.

(Clockwise from bottom left: Kiss hair promotion; With kids on rickshaw pedicab in NYC; With Mel in Chicago; With Viv at Cinderella; Accidentally channeling The Bearded Iris; Vying for the attention of the entire country of Greenland)

This woman is also busy, but in a different way. Her kids are older. And much more independent and self-sufficient. Which is as awesome as it is suckish. She misses her little people so much that sometimes it is crippling. But, at the same time, she absolutely loves watching her kids develop into funny, insightful, broad-minded human beings. And she takes full credit for this development, by the way. But, geez, she’s a bit of a peacock, isn’t she? (Oh, and she’s pissed at herself that she still hasn’t finished that book. But she’s working on it. She promises.)

What do you think? Have I changed a lot? Should I be calling my dermatologist for an emergency Botox appointment? Tell the truth. I can take it.

Oh, and how have YOU changed in the last ten years?

This entry was posted in Uncategorized and tagged how have you changed in 10 years, leslie marinelli, mamakatslosinit, pictures then and now, the bearded iris, writing prompt. Bookmark the permalink.