I made another Brite flip book today called Things To Do in an Extended Power Outage. Today marks our fourth day as an unplugged city. And the old dude sitting with a big ‘DAY FOUR!’ sign by the interstate is making sure everyone knows it.

But I’m one of the lucky ones. Lucky because I have a brother in town who has power. And we’ve been cooking in his oven, showering in his bathtubs and sleeping in his beds since Thursday. Still, I know what it feels like to sit in a hot …. dark … deathly quiet house during a power outage for no-one-ever-knows-how-long. It’s no fun. You make the most of it in the beginning with flash light games and general tomfoolery. (Yes, I said tomFOOLery.) But after a while, it becomes too hot to sleep at night. And the painfully still air in your home becomes stale and difficult to breathe.

So, with the extra time I’ve been given this week, I’ve been writing my ass off. Which doesn’t show at all because I’ve also been eating and drinking like a pig. I’m from New Orleans. It’s what we do. Especially during a hurricane.

Anyway, I’m tired … and feeling unwitty … so without further ado, I give you my latest goofball creation. CLICK THE IMAGE BELOW to view my collection of utterly useless, totally unhelpful but hopefully at least humorous Things to Do in an Extended Power Outage.

Ironically, as I wrote this post, my neighbor texted me with the following message: “WE HAVE POWER!!!” So … we’re going home tomorrow. (Did anyone else just hear my brother yell ‘Woohoo!’?) My stir crazy kids are anxious to be reunited with our beloved pets, Milo and Herve. They stayed back at the house because my brother is allergic. And also because we remained local. I would never leave them behind if we left town. 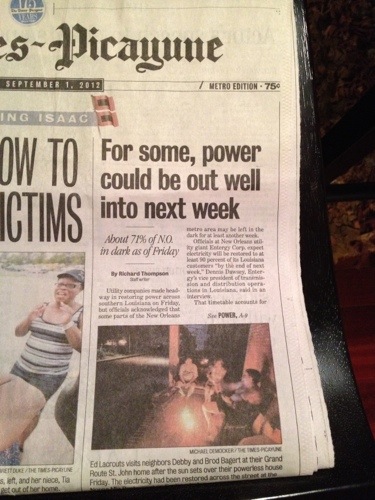 The cover of today’s Times Picayune

My heart goes out to everyone still without power. Among them are my parents. If any of my NOLA peeps wants to come sit in the A/C and suck on some ice tomorrow, call me.