Yes, that’s right. Just one year ago today, I wrote a blog post …

… then sweated buckets about it, sent proofs to half a dozen people, second guessed myself, ate a pound of cheese and drank a bottle of wine contemplating it, considered scrapping the whole thing, third guessed myself, cried quietly, berated myself in front of the mirror …

It’s been a very interesting first year. CLICK ON THE IMAGE BELOW to see just a few of the highlights in my scrapbook. 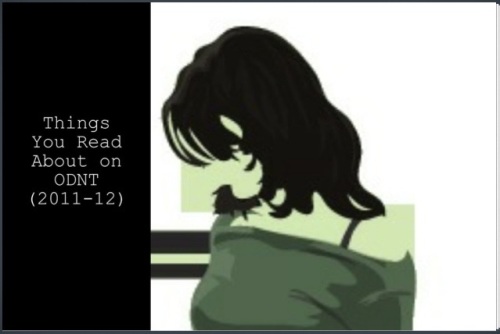 If you’re interested in reading some of the stories in this scrapbook, I’ve included the links for you at the end of this post. Because I understand lazy. And I know I would NEVER bother to look them up on my own. And I’m assuming that, if you read this blog, you’re probably lazy like me. So I did your heavy lifting for you today.

Thanks to all of you for riding shotgun with me the past year. Here’s to year number two!

* These posts have been deleted for undisclosed reasons. And, for the record,  it is NOT because I’ve been served with restraining orders from John Travolta, Norma Stitz and Homer Simpson.

Last weekend, I spent my days hanging with my girls at a beachfront property eating, drinking, talking and, of course, shopping. And I don’t even have the shopping gene. (Yes, I know. I’m a disgrace to my gender.) Still, I did pretty well in that I at least got ideas for everybody … especially my daughter, who is the easiest one to shop for in the family. She’s happy with anything we give her. Right now, I have her wanting a naked mole rat. (Yes. I am serious.)  We went in and out of dozens of stores at the nearby outlet mall. Among them was Toys ‘R’ Us which, like the majority of the retailers there, was holding all kinds of major sales. I was strolling through the aisles when I saw something that stopped me dead in my tracks – Black Label Barbies. I was a big Barbie girl in my day and these dolls would have hooked me then just as they do now. They were spectacular and, in keeping with tradition, completely inappropriate as role models for young girls.  I think the Black Label Collection is huge but the store where I was shopping had only four models so they’re the ones I’ll be introducing here. 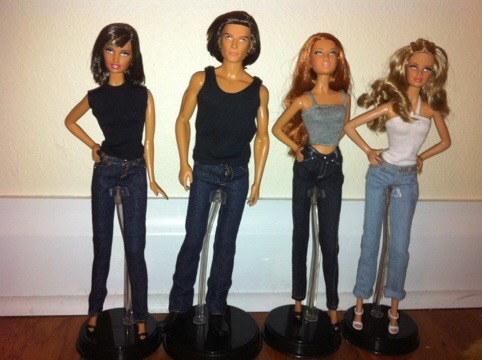 From left to right: Pavlina, Stavros, Bianca & Tiffany. Following are their bios.

Being one myself, I immediately identified with her and named her Pavlina. She’s actually from Eastern Europe but we totally conquered the language barrier and just clicked like schoolgirls. She loves American food (especially corn dogs) and eats like a pig, which you’d never guess from looking at her. She’s my most honest friend and would never let me buy a pair of jeans that make my butt look too big or too flat. We’re planning a trip to Atlanta together in the Spring to visit the Coke Museum and learn all about cokes from around the world.

I named him Stavros. He’s actually Pavlina’s BFF … aside from me, of course. He’s originally from Greece and came over to America with Pavlina as part of her foreign exchange program. He doesn’t really have any family so the two of them became very close when they first came to the country. They are not intimately involved and hate it when people ask them if they are. Stavros actually never seems to have any girlfriends around, which Pavlina can’t understand since he’s such a super awesome guy as well as an amazing dance partner.

I named her Bianca. Pavlina and I actually thought she had potential … until we realized what a condescending bitch she could be. She’s got, like, a 250 IQ and thinks she knows everything. She’s always talking down to us and trying to quote famous authors and important people from TV like Jimmy Fallon and Oprah. Once, for our Cinco de Mayo work party, she brought this disgusting dessert goo to share with everyone. She said it was like custard and called it “flan.” We said it should just be called “gross food that is nothing like custard.” And we thought it was very rude for her to bring something that nobody liked.

I named her Tiffany. Pavlina and I can’t stand her. She’s always getting into everyone’s business and copying our style. If we have to hear her say ‘Been There, Done That’ one more time, I swear we’re just going to scream. She is a Lady Gaga freak (which probably explains her hair) and her Halloween costume was so completely inappropriate. Oh, my God and “No, Tiffany, for the tenth time today, we do not want to check out a Zumba class with you, watch Bridesmaids with you (again!) or go to Applebee’s with you. Not now. Not ever!”

My husband laughed a lot but was also a little concerned when he finished reading this post tonight. Sure, my grown-up imagination can still totally hang with its childhood counterpart. Or maybe it’s the large Cajun Eggnog daiquiri talking. Either way, it was fun while it lasted. Oh, and if anyone asks … yes, I’d love one of these guys for Christmas.